The well known association with darkest Peru for most people is Paddington Bear. Others will think of hot and humid jungles where creatures are lurking in the undergrowth, waiting to pounce as you pass by! Stories of giant Anacondas, man-eating piranhas and savage cats have all helped to enhance the image of a ’green hell’, images exaggerated by traveller’s tales over the years.

Early this century the explorer Colonel Percy Fawcett talked about man-eating Piranhas on his Amazonia adventures in the 'green hell, and even shooting a giant 19m anaconda, more than twice the length of any recorded snake! It had to be a bit of an exaggeration, but by how much? And one of his strangest stories was about natives making whistling noises to get maggots to come out of the sores on a man’s back. Was this fact, or a ridiculous myth?

I had the privilege to be a guide at Explorer’s Inn in the rainforests of SE. Peru in 1984 and 1985, and returned in 1997 and briefly in 2005 and 2011. I soon learnt that most traveller’s tales are vastly exaggerated. Piranhas are far less menacing than they are made out to be, just small fish with fierce looking teeth. As a guide I would chuck pieces of meat into a lake to feed the piranhas, then dive in where the piranha were feeding. Much to the disappointment of my groups nothing ever happened. As for large Anacondas and big cats like the Jaguar, any threat is minimal, and if you do see one (and you certainly need a lot of luck) you should feel privileged, not petrified!

On one occasion, in 1997, I was lucky enough to see a Jaguar on the river bank as the boat headed past, on the way to the lodge entrance just upstream. I'd never seen one in the mid 80's so I was keen to find it again, and a short time later I returned to the spot in a canoe with one of the other guides. At first it looked like the Jaguar had gone, then we spotted it resting on a fallen tree trunk, a short distance up a creek. We slowly paddled ashore, carefully got out of the canoe, then laid down in the sand. At first, the Jaguar, not that far away, stared at us curiously for a while. Then it fell asleep with its legs hanging down over the sides of the fallen tree trunk! After observing the Jaguar for a while, we left it to its afternoon siesta, like a giant spotted pussy cat! 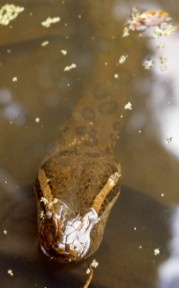 On another occasion, on an oxbow lake called Cocococha, we discovered a huge Green Anaconda (sometimes called Giant Anaconda) coiled up in the water under one of the canoes. It stuck its head out of the water to check us out, I even got a picture of the head, which is relatively small in comparison to the size of the body. Then it slowly swam away, out past the side of the dock, and using the side of the dock as a measuring stick, it worked out to be around seven metres long!

Very few people have seen such a large snake. There is a debate whether the anaconda or python is the longest snake in the World, at the moment it is the Reticulated Python with one recorded at 10m in 1912, and one in captivity at 7.67m. But the Green Anaconda is certainly the largest, the biggest in girth (the one I saw had an impressive girth) and the heaviest, and the bulk of a 4.5m anaconda is about the same as a 7.4m python. I like to think there are anacondas out there over 10m and there has been a US$50,000 cash reward for anyone who can catch a snake 30 ft (9.1 m) or longer!

But the real danger in the rainforest realm comes from biting insects and associated danger of disease. However, with the right precautions you are unlikely to suffer and, in reality, the Amazon is quite a safe domain. Always eager to explore I never felt threatened or in any danger when wandering through the rainforest. But I never imagined that one day I would actually be incorporated into the rainforest food chain - and live to tell the tale!

When I returned to Explorer's Inn in 1997, it was to do an ecotourism survey. I soon discovered that most wildlife was much easier to see then the time I was a guide in the mid 1980's. It wasn't that long after commerical hunting had been banned in the region, and since then the area around the lodge had gradually become a safe refuge over the years. Peccaries (like a wild pig) would only run a short distance away if disturbed, and from checking tracks it was obvious that big cats (Jaguar and Puma) lived close to the lodge, and I had that Jaguar encounter I mentioned earlier.

My theory is that for a long lived animal like the Jaguar, after hunting is banned in an area, it takes several generations before animals realise a boat going past is no longer a threat, and a mother Jaguar, Tapir, or peccary, will pass on its 'fear' to the offspring. Therefore studies a few years after hunting is banned that assume tourists scare away animals, need to be treated with caution. It could be the fear of persecution from the time animals were hunted, and any studies on the impact of tourism needs to consider the 'time factor' to lose this fear.

Anyway, one day I scratched the side of my head and felt a slight bump, obviously a recent mosquito bite. However, over the next few days the bump continued to grow .... and something inside started to move! My curiosity aroused I got someone to have a peek and, as anticipated, my bump had a hole in the middle like a boil with a hole! I had become the host to a sututu - the maggot of a 'botfly’!

The botfly looks like a housefly and has a bizarre life cycle. The botfly catches a mosquito and manages to lay an egg on it. As the mosquito feeds on the blood of a victim the botfly larvae hatches, moves across to the host, and starts to feed. But be warned, botflys also lay eggs on sweaty clothing left in the open overnight. If someone puts on a sweaty shirt the next day they could get more than they bargained for. So remember to wash your clothes regularly in the Amazon.

Once the sututu has settled down in its new home the area around it starts to swell and to resemble a boil with that hole in the middle. If the sututu has taken up residence on an accessible part of the body you will actually get to see your guest. To breathe the sututu waves an appendage like a snorkel out of the hole ever so often.

However, I was unable to watch my sututu’s progress since it was on the side of my head. I was disappointed since a dedicated sututu host can get quite attached to their ’pet’ and will look forward to its appearance at ’breathing’ time. But most ’victims’ are appalled by the horrific fact that they have a maggot under their skin and they will try anything to get rid of it.

They will squeeze the swelling in an attempt to eject the sututu, but success is unlikely. It is very difficult to get rid of a sututu before it wants to vacate the premises because of the spines that cover the body. Spines that are erected when someone tries to eject the sututu, wedging the maggot in its lair. So they then resort to poking things down the hole and pouring all kinds of preparations into the cavity to get rid of the sututu.

But this creates a catch-22 situation, if you manage to kill the sututu you can end up with a dead maggot in an unpleasant festering wound. Not the most ideal situation to get into in the sticky and sweaty conditions of the rainforest.

But instead of the ’stick’ approach you can always try the ’carrot’ approach. You can attempt to entice it out by, of all things, calling to the sututu. In darkest Peru the local people will make tutting noises over the swelling, rather like an old lady making noises of disapproval. Apparently the sututu peeks out of its hole to investigate the noise, at which point you squeeze hard to eject the maggot. Whistling at the right pitch is also supposed to work and this is the basis of Colonel Fawcett’s bizarre story.

After six weeks the bump on my head had grown to the size of a large grape and was aching due to the stretched skin. I could feel my sututu moving from time to time, a distinctly odd feeling, but it never hurt me. As it feeds an anaesthetic is released.

Note the 'my' by the way, I was now getting quite attached to my sututu and I had even given ’him’ a name, ’Boris the botfly’. Left alone my sututu would have been about inch long when it finally moved out to pupate. Sadly, with the ache caused by the stretched skin, I finally decided to evict my sututu. As guests looked on one of the staff who came from the local village carefully shaved away the hair from a small area around the swelling. Next he blocked off the breathing hole with nicotine and put a plaster over it. His plan was to suffocate the sututu but I wasn’t very happy about this. I didn’t want a dead maggot rotting away in a wound on the side of my head! Instead I suggested trying to ’evict’ the sututu about hour later when it was still alive, but short of breath.

At the appointed time the plaster was peeled back and the maggot reared half way out of the hole, much to the horror and disbelief of the surrounding audience! My swelling was then squeezed really hard and, as I flinched, there was a quiet ’pop’ as the sututu flew out of my head, dispersing terrified guests in all directions, before landing on the floor.

A little while later I was holding the sututu I had nurtured for so long, a larvae that would have been a good sized maggot by a fisherman’s’ standards. And being the good naturalist, I took a picture with some measurements for comparison, as shown at the start of this article.

In a certain way I felt guilty at evicting my sututu. I had wanted to allow it to hatch nto a fly! It never harmed me and I had the privilege, as a naturalist, to be part of the rainforest food chain for a while!

So why did I call him Boris the botfly? Well, growing up I always like the rather silly song 'Boris the Spider' by The Who! The 'creepy crawly' song was written by John Entwistle, the very first song he wrote for The Who, in 1966. And in this live version you also hear the mad Keith Moon shouting from the back of the stage at the start of the song!

And the final part of the story? When I got home I sent an article about my botfly experience to Wanderlust magazine, along with the pictures, and got paid £250!