Realm of the Polar Bear 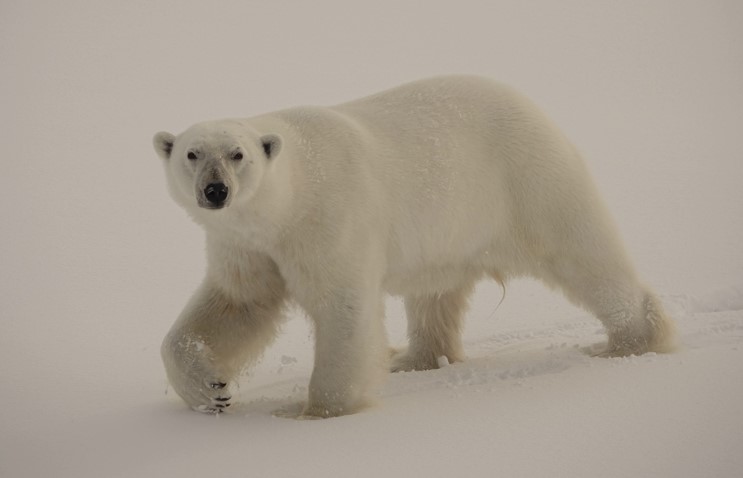 Antarctica ihas a big attraction as the last great wilderness and one of the ultimate destinations to explore by small cruise ship, with zodiacs to get ashore to explore this stunning landscape, or to cruise amongst the icebergs. Others get to Tierra del Fuego at the tip of South America and the city of Ushuaia 'At the End of the World' with the urge to take that extra step, and head to Antarctica. However, for some reason, until recently, the high Arctic did not have the same fame or ‘attraction’, which is rather odd.

After all, if you get to Iceland, the Shetlands, or Norway, it is not that far to the Arctic. One of the stunning Arctic landscapes is Svalbard, which happens to be the largest wilderness by far in Europe. The whole archipelago, known as Svalbard, is well to the north of Norway, the 'governs' Svalbard, although Russia also has a presence here. Spitsbergen is the name given to the largest island in the group, meaning pointed peaks, it aptly describes this spectacular arctic island.

There are few human settlements in this vast wilderness and there is the most northerly permanent settlement at Ny Alesund, famous as a base for Arctic exploration and mining, and now focusing on polar and atmospheric research, There is also the Russian mining town at Barentsburg that, with the statue of Lenin, makes you feel you are in the USSR, and somewhere in SIberia (but there is a brewery in town now!). The biggest settlement of all was the Soviet mining town of Pyramiden (named after the shape of a nearby mountain). It is one vast ruin now, with some impressive Soviet era buildings and looking like a location in a disaster movie. It is an eerie place but a great location to see Ptarmigan and Arctic Fox. And you can even  go for a drink at the hotel bar in town, but do watch out for Polar Bears as you stroll along! Cruise ships do not tend to visit these 'industrial' locations (prefering the wilderness experience), so you may wish to book a tour before you head off on your main cruise, or afterwards.

Longyearbyen is the 'capital' of Svalbard, although 'captial' is a bit misleading in this vast wilderness ‘capital’. Longyearbyen was a Norwegian mining and fur trade outpost that is now focusing on tourism, with regular flight connections to Norway. With the connection it is the ideal base to explore the archipelago.

Over the summer, with 24 hours of daylight (and the sun still quite high above the horizon at midnight) you can fly to Longyearbyen and circumnavigate the archipelago by ship, using zodiacs to get ashore and to do zodiac cruises. In this way it matches anywhere in Antarctica and considering the Gulf Stream pushes the ice further north, pretty incredible considering the location of Svalbard is around 78 to 81 degrees north. Anywhere else this far north has been locked up in the pack ice, although things are changing with climate change. 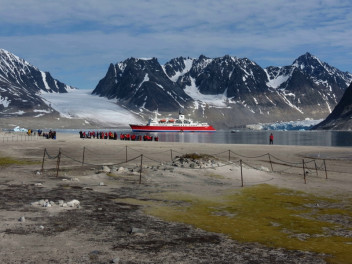 Exploring the archipelago by ship is an amazing experience, sailing through a landscape that is just as spectacular as the Antarctica Peninsula, but poles apart in more ways than one. The mountain scenery and the fjords are particuarly spectacular on the main island of Spitsbergen, enhanced by the geology. Svalbard is one of the most diverse places for geology in the World, and in the barren Arctic landscape, it is all on show, with some really impressive rock formations. There are also plenty of glaciers, plus the largest ice cap in Europe.

Mining has already been mentioned and exploitation goes further back. The first oil boom was not in the modern era, but in the 1600's with whalers hunting the Bowhead in the waters around Svabard.  Dutch and English whalers even fought for the best spots, and there the grave sites when many of the whalers buried their dead that did not make it through the season. 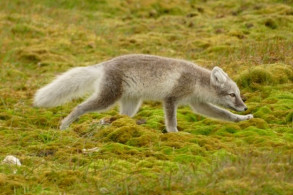 Due to the impact of the Gulf Stream, there is a lot of vegetation and tundra, with a diverse range of plants. There are only two species of higher plants in the whole of Antarctica, but Svalbard in the high Arctic is surprisingly good for plants. The Purple Saxifrage flowers early in the season (which is late June on Svalbard!) and late July is particularly diverse for plants). The tundra is also a great place to see Reindeer, that are much smaller and shorter legged than on the European mainland.

The tundra is also a great palce to look for the dens of the Arctic Fox amongst the rocks. Svalbard is an island with no terrestrial Arctic animals like lemmings, so how did they get there? The Arctic Fox made it by crossing the ice, the Polar Bear by crossing the ice and swimming. The Reindeer probably drifted acoss on an ice floe. 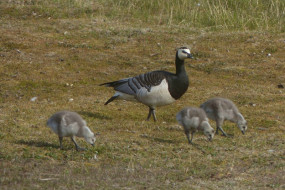 A diverse range of birds can be seen including two terrestrial species – the Ptarmigan and the Snow Bunting – the latter having an incredible knack feeding on small insects (you try to find them!). A range of wildfowl and waders also migrate to the islands and breed in large numbers, including Barnacle Geese (that overwinter on the Scottish Solway coast), and Purple Sandpipers. In contrast, on the Antarctic continent, there are no terrestrial birds and no migratory wildfowl. It is not so much the distance since some species that migrate to the Arctic can cover staggering distances at sea (and a few stragglers do manage to reach the fringes of Antarctica). It is the lack of food in Antarctica, even in the South Shetlands, from plants to insects, that makes it unsuitable for migratory wildfowl and passerines. 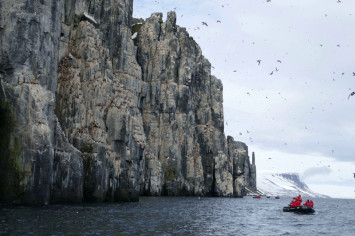 Seabirds occur around Antarctica in great numbers, including those penguins. Seabirds are also abundant around Svalbard, including Glaucous Gulls, Arctic Terns, Arctic Skuas, and huge colonies of Kittiwakes, Fulmars and auks, and some of the seabird locations are spectacular, such as Alkefjellet ('the bird cliffs').

Auks are the Arctic equivalent of penguins and the flightless Giant Auk, now extinct, was the original 'penguin'. Early explorers saw what looked like the Giant Auk in the southern hemisphere and called them penguins as well. They are unrelated but share the same niche. Penguins became flightless with the lack of predators, the wings evolving into swimming paddles. Auks (apart from the Great Auk) did not go this far and still have to fly to get away from predators. However, they are still amazing underwater swimmers and the seabird colonies are as impressive as a penguin rookery. Species include the Brunnich’s Guillemot or Thick-billed Murre, Black Guillemots, a few Puffins (the largest of the Altantic subspecies), and vast numbers of Little Auks or Dovekies (which might be the most common seabird in the World). In turn these bird colonies attract the attention of the Arctic Fox. 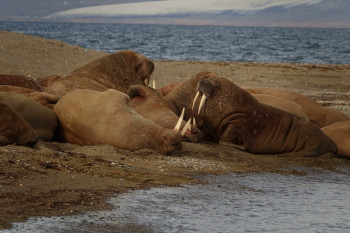 The seas are very productive and attract a range of whales including the Fin Whale, Minke Whale, and the inquisitive Humpback Whale. Blue Whales are being observed more (but never rely on seeing one) and if you are very lucky, you just might see the elusive Bowhead. This far north you can still see White-beaked Dolphins, with a good chance of seeing the ‘white whale’, the Beluga, although few Narwhal are seen around Svalbard.  Numbers of Walrus are really starting to increase, hauling out at favoured remote locations. Since they have not been hunted around Svalbard since the 1950s, they can be quite curious and a real highlight of any trip. At sea there is the chance to see groups of Harp Seals (easily mistaken in the distance), and, amonst the sea ice, the chance to see a range of seal species including the small Ringed Seal and the robust Bearded Seal. 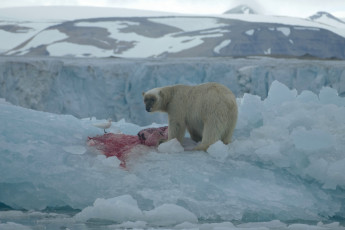 And then there is the predator that feeds on the seals and ‘icing on the cake’ for any trip to Svalbard - the Polar Bear - and with the lack of hunting over the last 20 years they are increasing (with around 3000 in and around Svalbard and nearby Jan Mayen). It means you have to be careful going ashore, the guides carrying guns, and on a circumnavigation there is a good chance to see them on several occasions, either ashore, from a zodiac, or from the ship. Churchill may be the place for reliable Polar Bear encounters. But Polar Bear sightings in Svalbard are also becoming reliable and it is viewed as being the best place to see the Polar Bear in more ‘natural’ settings than Churchill. The ultimate is to see a Polar Bear with cubs, or around a kill, the carcass also attracts the attention of Arctic Foxes, Glaucous Gulls, and a true Arctic bird, the all white Ivory Gull.

Many ships also head up to the edge of the pack ice at some point in the cruise - which can be a lot further north in the late summer. There is always the hope of seeing Polar Bears, and if you are very lucky, a curious bear may come right up to the ship! But do not not assume you will always see bears, sometimes ships spend a couple of days searching the pack ice and find no bears.  But is it still a very special place to be, amongst the pack ice at a location that is 'On Top of The World!' 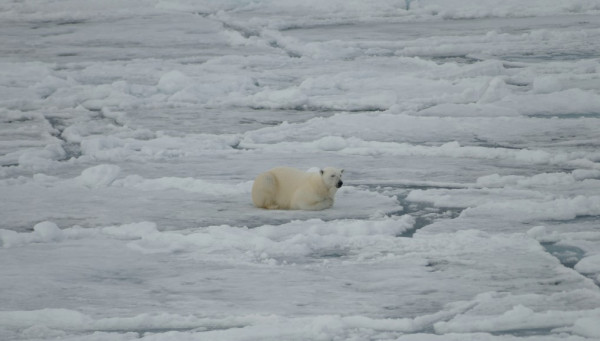 Later in the season, as the ice retreats, there is also the increased chance to sail around the whole archileago on 'circumnavigation' cruises and explore the really remote north-east coastline with extensive polar deserts and the longest ice cliff in the northern hemisphere.

Therefore, if you ever get the chance, do consider an expedition cruise around Svalbard, you will never forget it! You can also consider a cruise at the start of the season that explores the spectacular fjords of Norway and the chance to see birds like the White-tailed Sea-eagle, and then passing Bear Island on route across the Barent's Sea, to end the cruise in SW Svalbard. 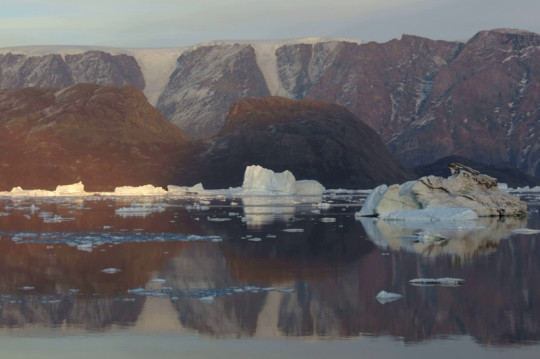 Or combine a trip to Svalbard and NE Greenland at the end of the season. NE Greenland that has some of the most stunning and unique landscapes in the World. Along the coast there can be lots of pack ice pushed south in the cold current coming out from the Arctic. And there are the fjords, including the largest in the World - Scorbsy Sund.

By the end of the summer the snow has melted on the tundra and the lower slopes and the geological formations in the mountains provide a dramatic and colourful backdrop, with stunning reflections in the fjords that are full of huge icebergs. This is unique to Greenland with the huge 'glacial' bergs that break off from the glaciers that come down from Greenland's ice sheet. In Antarctica the really large icebergs tend to be tabular bergs, whilst glacial bergs tend to have the backdrop of the 'white continent'.

And there is the chance of see a range of Arctic wildlife you will not see in Svablard, including Gyrfalcon, Arctic Hare. Weasel, and if you are lucky, the Musk Ox, an animal that used to hang around with the Mammoth! 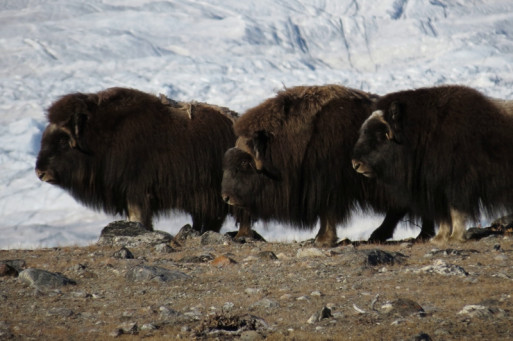 A range of companies do Arctic and Antarctic cruises, including G-adventures, check out: www.gadventures.co.uk/travel-styles/cruising/expedition-cruises.