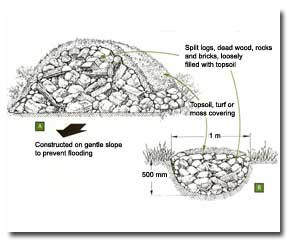 A tidy log pile surrounded by good cover will gradually become over grown and will mature into a good refuge.

On a larger scale rubble, logs and soil can be mixed to create hibernacula - raised or partially buried in the ground (illustration below from Great Crested Newt Conservation Handbook, available from Froglife www.froglife.org).

Hibernacula can be seeded or covered in turfs and these can be located in various locations from within a wood (good winter refuges) to open habitat (good summer refuges). But the most suitable locations tend to benefit from both sun and shade.

Hibernacula backing onto suitable ’marginal’ habitat, with time to mature, can become ideal refuges. But there is a tendency for refuges to be too tidy, over-engineered, and even put in the wrong place. For example, a ’tidy’ log pile in a very open location in a popular country park will provide some shelter but little else. How do you get the balance between something that is natural and neither too ornamental or something that looks like it has been fly-tipped?

Carefully constructed hibernacula have a lot of potential. But seeded, or covered in ’garden-like’ turf, they will take time to mature. With a strong public presence on site and the wrong management they can become a grassy mound surrounded by a park-like landscape with minimal benefit for wildlife. What is the best way to avoid this?

Curiously some of the best hibernacula are often unintentional. Overgrown allotments with old plots mixed with soil, rubble, grass heaps and other materials make superb refuges.

The image below is an example of a refuge that was created unintentionally. Soil, logs and grass were piled up to one side and left when a car park was extended in a country park. With a good and diverse range of vegetation on the mound, uneven cover, nooks and crannies, and the location (plenty of sun for basking and nearby scrub for shade), it created an ideal refuge and hibernacula.

On a grander scale this can be done with hibernacula, as shown in these before (right) and after (below) shots. In the winter a low hibernacula with a mixture of rubble, wood and soil was created in a suitable location close to some shrubs on a vegetated headland of the site.

The turfs and some soil were put to one side and placed back on top once the hibernacula had been completed. These were not lovingly put back, as if laying a garden lawn, but in a casual way, creating an uneven turf.

If the area had been seeded, with the location close to a well used footpath and local vandalism, it could have been trampled and trashed. Instead it was virtually ignored and quickly matured with a good growth of ’tussocky’ vegetation, rather than a hibernacula that looks like fly-tipping - or an ornamental-looking grassy mound.

In creating ’five-star’ hibernacula there are a number of factors to consider.

If the site is overgrown you may need to strim the area back to allow any reptiles to move off before removing the turfs, or do a careful ’destructive’ search to check for animals as you dig up the area. If the area is a sensitive reptile site, or Great Crested Newts may be present, contact a herpetologist for advice.

In another example large hibernacula were created in the margins of a country park that had to be cleared and capped due to previous use as uncapped landfill before it become overgrown. All materials required for the hibernacula came from other parts of the site being cleared.

A mixture of rubble, wood, tree roots and loose soil was placed in a hollow and covered in soil, allowing rubble and wood to poke through in places, creating nooks and crannies, some going into the middle of the refuge. In some areas soil was compacted, elsewhere it was left loose.

Grass turfs were placed over much of the mound and two shrubs (dug up on another part of the site) were replanted on the mound. Finally the compacted soil on the route into the site was loosened and more turfs put down. These kind of hibernacula will quickly mature (e.g. for early release of reptiles if involved in a translocation exercise) and the shrubs (often absence on many man-made hibernacula) will provide vital shade and cover.

But all too often it can all go wrong when hibernacula are planned - when things can get too tidy and over-engineered. The aim should be to create natural looking refuges using a style that is a bit like garden force meets scrapheap challenge!

For example a simple log pile can be greatly enhanced for wildlife. Find a suitable location and remove the soil and turf from the desired location and put it to one side - ideally on some tarpaulin or similar to minimise the impact on the surrounding vegetation. Then build your log pile, making sure it is not too tidy, and place the soil and turfs back over the log pile, allowing some logs and rock to poke through, the vegetation and soil providing an ’instant’ hibernacula. Some cover (e.g. south facing) should be left loose, allowing logs to poke through and to encourage all those nooks and crannies. Some parts can be compacted down since compacted soil around deadwood can be good for stag beetles. Once completed you’ve created an ideal log pile that is great for wildlife, looks good, and is vandal proof!

Creating a good hibernacula is important, but the picture isn’t complete without suitable long-term management.

Try to create uneven margins with headlands and glades that will be far more diverse than straight margins.

Try to avoid the temptation to clear the most diverse grassland margins. Instead, try to cut back vegetation in those margins where the change from short grassland to dense scrub is more abrupt.

Some areas that may have been distrubed in the recent past may need cutting more often to start with to prevent thistles and stinging nettles from dominating and allowing other vegetation to come through.

Once suitable vegetation is established the cutting regime for open areas of grassland will vary from site to site. But grassland boundaries in wildlife sensitive margins should be cut far less and on a rotational basis. This might be every 2 or 3 years, but do consider cutting some margins only every 3 to 5 years. This creates a ’carpet’ of vegetation that can be great for reptiles and for insects like carder bees that like to nest in the vegetation - in contrast to typical bumble bees that burrow into the soil. One reason carder bees are scarce in many locations is that grassland areas are cut too often.

To maintain these margins some management is required. Whatever cutting regime is used, the compaction of vegetation in marginal areas is major dilemma when using grass cutting machinery, apart from the danger of crushing animals in the area. This can be solved by strimming sensitive sites.

For larger sites, using a hedge cutter, as shown above, is a good idea. Sensitive margins can be done as a side cut and are never driven on. The height of the cut can also be varied in the ’wildlife margins’ with a slightly higher cut off the ground to maintain lush grassy glades and high cuts to scrubby headlands to maintain the scrub, but not allowing it too smother any glades. This creates a diverse ’3-D’ habitat mosaic/profile (diversity in the habitat and soil profile) that is also great to look at (compared to overgrown areas that are just ’neglected’, often leading to complaints from the public. Natural habitat is created that is ideal for reptiles, amphibians, other burrowing animals, whilst encouraging tussock grass and even anthills - the latter too rare in many over-managed locations!

Please contact me for further information on creating hibernacula and refuges